Ozark Season 4: Is Netflix Planning On Releasing The 4th Season?

The concluding chapter of Ozark was greenlit by Netflix a while ago. But it has been quite a long since we got any major updates on its 4th season. So is Ozark Season 4 canceled, or is it still in its production phase? The good news is that the show is not canceled, and the only reason it takes longer than the previous seasons to release is because of the problems created by the pandemic. Plus, the upcoming season will be divided into 2 parts, each containing 7 episodes, so naturally, the filming takes longer than usual.

The Netflix Original series revolves around Marty Byrde (played by Jason Bateman), who gets involved in an illegal business with a Mexican cartel. To ensure his family’s safety, Marty relocates them to Missouri’s Lake of the Ozarks region. But he has some ulterior motives too! Bardy then sets up an even bigger money laundering business. The plot is very much similar to Breaking Bad! So, if you love crime mystery shows, then Ozark should be on your watchlist!

Killer Mike will make a cameo in Ozark Season 4! And obviously, a criminal couple of Marty and Wendy Byrde will also return for the show. But who else other than them will be joining the cast of the 4th season? To find out, continue reading the article!

Netflix has not disclosed the release date for Ozark Season 4 yet, but the show will premiere in 2 parts. We are expecting the first part to release in late 2021 and the second part in early 2022!

The star of Ozark, Jake Bateman, revealed that the filming for the 4th season had begun in November:

“We’re going to start November 9th. Everything is moving well toward that, and we’re very confident in the guidelines and protocols we will be following. We’ve got tons of consultants, [and] we’re learning a lot from other productions.”

Then what is taking so long for the 4th season to release? The halts in production due to the pandemic are to blame here! And as there is no projected release date for the 4th season, we can’t say anything definite about its premiere. 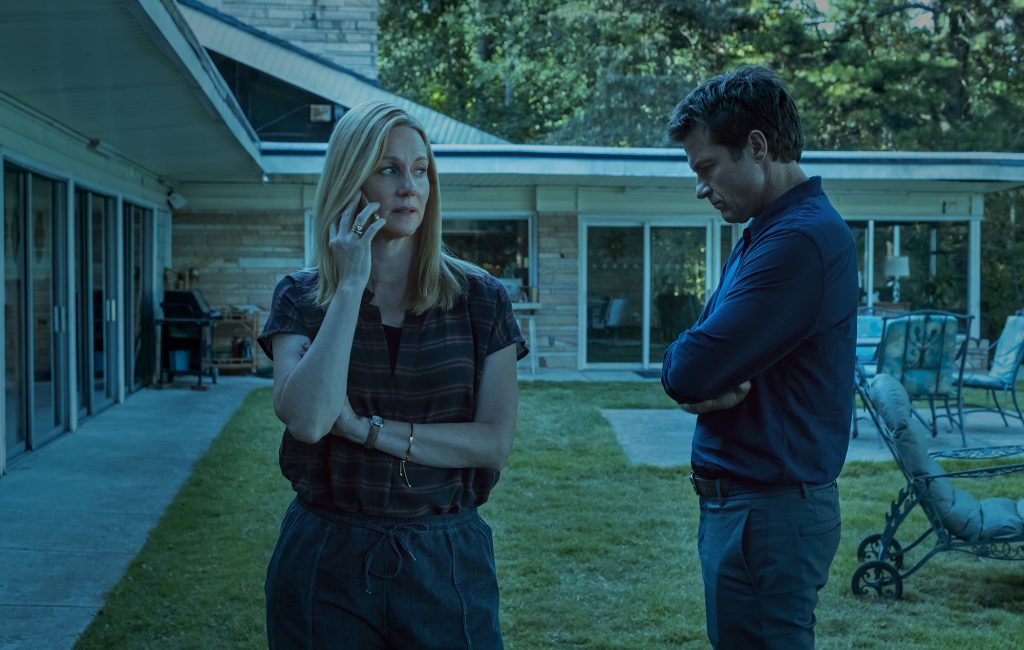 The majority of the cast members of the previous season will return for Ozark Season 4. They include:

We are not sure whether the supporting actors will return for the fourth season. Maya Miller (Jessica Frances Dukes), Frank Cosgrove Sr (John Bedford Lloyd), or Sam Dermody (Kevin L Johnson) are a few of them.

Don’t expect the characters who died in the previous seasons to return. This cancels out the possibility of seeing Helen Piece (Janet McTeer), Ben Davis (Tom Pelphrey), and Sue (Marylouise Burke) in Ozark Season 4. Even though the upcoming season will be the last ever to come, the showrunners have introduced some new characters to the story.

Bruce Davison will be joining the cast as Senator Randall Schafer. Along with him, Veronica Falcón will feature Camila Elizonndro and Ali Stroker as Charles-Ann. Not much is known about their character details, but they will play a significant role in developing the plot.

The third season ended with Helen Pierce getting murdered at the hands of Navarro, and Marty and Wendy both witnessed it. So, Ozark Season 4 will pick up the story from here! And Bateman has even mentioned this in an interview:

“The next season, the first episode, is Laura [Linney] and I looking in the mirror just after that moment, cleaning Janet [McTeer] out of our hair. It’s a nice 10 minutes later pick-up from it.”

So, Byrdes now have an even more complicated relationship with Navarro. Ruth had always wanted to cut the Brydes off, and now she finally has a good enough excuse to do it. But will she follow her plan? Wendy had let her brother die in the 3rd season. This will definitely affect the Byrde family, especially Jonah, who disturbed his uncle’s death.

As there is no official plot synopsis for Ozark Season 4 so far, this is all that we can say about the storyline. But hopefully, we’ll get more updates on the storyline by the end of the year!

There is no official trailer for Ozark Season 4, and as we don’t have a release date for it either, it is quite hard to predict when the trailer will drop. So, we’ll have to remain patient!