The COVID-19 pandemic had affected almost every sector of the economy. Even, the entertainment world is still suffering. Due to it, the producers had to pause the famous series The Walking Dead, but now AMC is set to close the incomplete Season 10 and has announced The Walking Dead season 11.

Here, you will get all the latest updates about The Walking Dead Season 11.

The Walking Dead is a post-apocalyptic horror TV series, originated in the United States.

This series is part of a series of comic books written by Robert Kirkman, Tony Moore, and Charlie Adlard.

The Walking Dead Season 11 will consist of a total of 24 episodes. The details about the parts of the season are available further in the article.

Read the full article for updates about the plot and cast of the series.

What Is The Release Date Of The Series The Walking Death (TWD) Season 11?

The Walking Dead season 11 will be divided into three parts. Each of eight episodes. The first batch of the series, including episode 1, will premiere on Sunday, August 22, 2021.

The second batch will debut later this year or early 2022. And then, the final part of the episodes will likely get a release in spring or summer 2022.

We can expect season 11 episodes to start streaming on AMC Plus a few days before the AMC cable airing.

Many storylines have been left open-ended from the previous season that will most likely be explained or fixed in season 11.

What Is The Expected Plot Of The Walking Dead Season 11?

Season 11 will start where the tenth installment of Season 11 left off: a face-to-face encounter between Maggie and Negan, who is returning to Alexandria after being banished to a shelter in the woods. Is Negan reformed? Or will his dark, brutal side re-emerge? And will Maggie eventually get revenge for Glenn’s death? 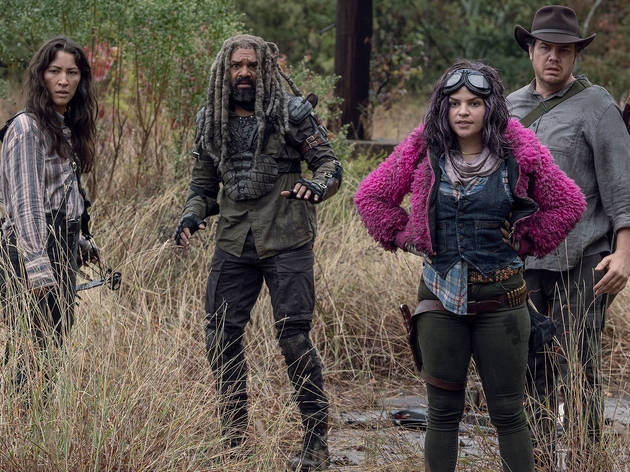 Meanwhile, we will get to see new villains called the Reapers. They’ve already hunted Maggie and friends for some time, and now they’re approaching Alexandria.

But season 11’s big storyline will be introducing the Commonwealth. Princess kept joined by a mysterious group, but we already know that Mercer is entering the cast, so it’s sure we are heading to the Commonwealth. Plus, the community is a significant part of the final arc in the comics.

The Commonwealth is a city-state with advanced weapons and thousands of people. Their goal is clear to them. They want to get back to where society was pre-apocalypse.

We will be updating more spoilers and plots. Stay tuned for the updates.

Is There Any Trailer Teaser Available For The Walking Dead season 11?

Along with the declaration of the release date of season 11, AMC also dropped a short teaser trailer for The Walking Dead season 11.

The teaser starts with the voice of the cast, Eugene (Josh McDermitt), answering questions like “Why are you here?” and “Have you ever been vaccinated for the measles?”

Fans are thinking the questioner is Mercer (Michael James Shaw), a character from the comics. The trailer also features a short shot of red armor, which belongs to Mercer.

You can watch the short teaser here.

Who Will Be The Part Of The Walking Death Season 11- The Cast?

The cast of The Walking Dead Season 11 is as follows-

What are the ratings of The Walking Dead?

Rotten Tomatoes– It has scored 80% on this platform.

Where can we see The Walking Dead season 11?

We can easily watch this series directly through the Prime Video App, Roku Channel, and Apple TV Channels if you have subscribed to AMC+. Subscriptions to AMC+ are free for seven days and gave ad-free access to shows on AMC, BBC America, Shudder, SundanceTV, and IFC.

Ratings of the series are enough to prove that this series has a huge fan base.

Fans were waiting for this news for a long time. Finally, the makers announced the date.

Stay tuned for the latest updates of season 11.