Money Heist has never failed to meet the expectations of the Fans. The series has ramped up the action with each passing season. As we saw, the Money Heist part 5 began on a deadly note and was packed with a lot of bloodshed and action. Five episodes in Part 5 Volume 1 have given the fans goosebumps to Fans, especially the death of one main character, Tokyo. The Finale episode of Money Heist Part 5 Volume 1 has left the fans at the edge of their chairs. Fans have been curious to find out who is alive and who has died as the team is tearing up. Thankfully, Money Heist Season 5 Part 2 will not take much time to arrive.

Money Heist Part 5 Volume 1 premiered on September 3, 2021.  Netflix announced that season 5 is coming to Netflix just in 3 months. It will hit the screen on December 3, 2021.

So, stay tuned and mark your reminder accordingly.

All the three directors, Jesús Colmenar, Koldo Serra, and Álex Rodrigo, are reurning for season five.

Most of the characters from Money Heist Part 5 Volume 1 will also likely return for volume 2. 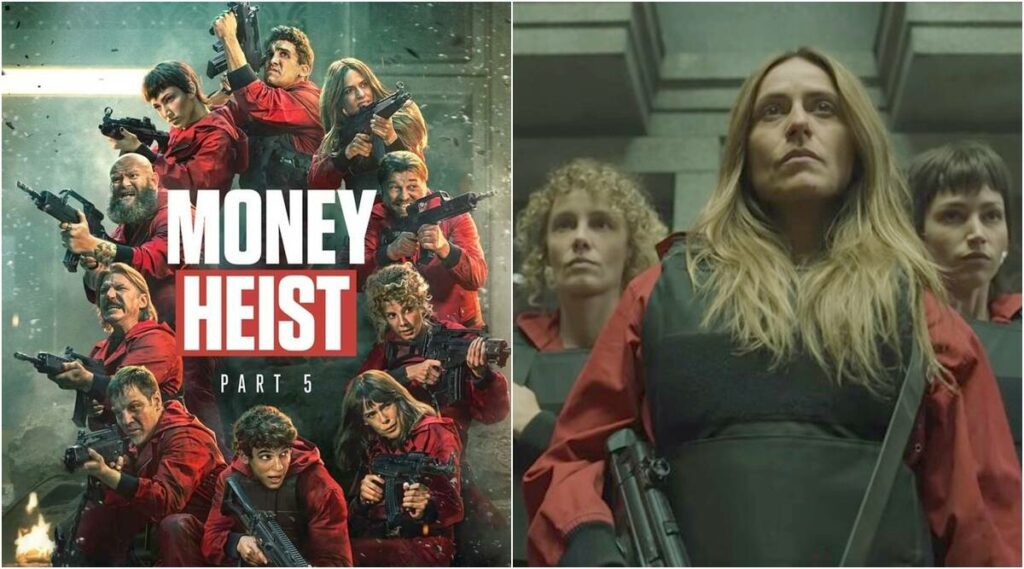 Netflix has not revealed the official plotline for Part 2 so far. However, Tokyo’s death could have a significant impact on their preparations to complete the crime. Army team is also on their backs, and a battalion is ready to barge into the Bank of Spain if things get out of hand. Alicia Sierra, on the other hand, may threaten The Professor with leaking the audio evidence.

We watch Alicia give birth to her kid with Professor’s aid in the last moments of Volume One. Meanwhile, owing to the ever-annoying Arturo, the squad is battling the captives. Stockholm shoots Arturo and drags him out of the bank.

A team of army personnel has also entered the bank and is pursuing them head-on. When the team confronts them, just as we believed the team would outclass them, the army personnel takes the upper hand by hurling a grenade. Some team members become trapped within a museum room, while Denver, Tokyo, and Manila become trapped in the kitchen.

Denver and Manila flee the scene, while Tokyo chooses to remain. Everyone was pleading with her to flee, but she ignored them and later was wounded by numerous gunshots and was knocked out after an epic gunfight.

Now, the team has been wrecked. It will be fascinating to see how the heist story will end forever in the upcoming season.

Netflix has not released a separate trailer for Money Heist part 5 volume 2 so far. However, you can watch the announcement trailer here released on May 24, 2021.

How Many Episodes Will Be in Season 5 Part 2?

There will be a total of 5 episodes in volume 2, just like in Volume 1.

Money Heist season five is officially the last and final season in the series. However, Pina, the showrunner, has hinted towards the renewal of the series in another form. He told Oprah magazine that he had a spin-off of the series in his mind.