Written and produced by Amanda Peet, The Chair is yet another dark comedy-drama about to make its debut on Netflix. It stars some of the most popular and talented actors, including Sarah Oh (who starred in Grey’s Anatomy, The Princess Diaries, Over The Moon, and several other Emmy winning movies), Holland Taylor (who has played supporting roles in Two and a Half Men, Legally Blonde and To All the Boys: P.S. I Still Love You) and Jay Duplass (the award-winning star actor of Blue Jay). With an exciting plot full of hilarious situations that will have your stomach hurting from all the laughing. The Chair Season 1 is just around the corner, and fans have several questions about its plot, cast, and trailer. You can find out the answers to all your questions about this thrilling new series down below.

Netflix announced the release date of The Chair Season One in May on its Twitter page. The page had a caption that reads: “Pull up a seat and meet the Chair, a new comedy starring @IamSandraOh and created by Amanda Peet. Premieres August 27.” The caption was paired with a picture of an extract from Pembroke University’s student newspaper announcing Dr. Ji Yoon’s appointment as Chair of the English Department.

However, production wrapped up sooner than expected, and Netflix has rescheduled the release date to August 20, 2021! There will be a total of six half an hour episodes in the first season, and filming for all of them is complete.

With Pembroke University’s English department failing miserably, a new chair needs to be appointed who may have to take the fall for the whole department. Dr. Ji Yoon Kim is chosen for this post, and as the first woman to become chair, she can’t afford to fail at this chance of proving her skills and worth. Tackling racism and sexism, the Chair follows the struggles of a passionate Asian woman as she tries to save her department from failing and losing her job. 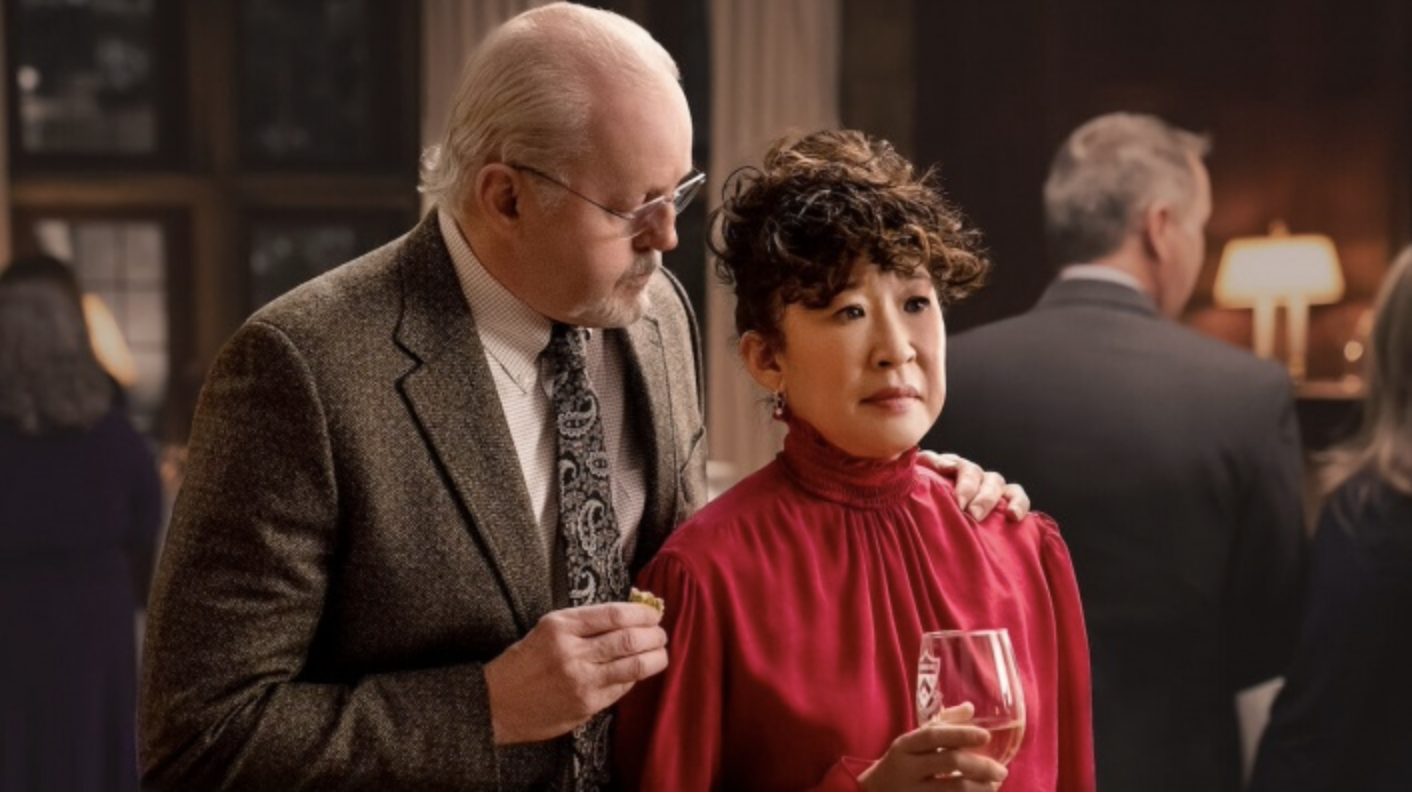 With rising pressures and increasing work responsibilities, Ji Yoon feels confused and lonely as all her close work friends and confidants aren’t comfortable around her since she is their boss now. At the same time, she must also fulfill her duties of motherhood. And navigate her way through an extremely confusing relationship with her colleague Professor Dobson. The worst part is that Professor Dobson is quite outrageous and is actually involved in the university’s latest scandal with students protesting against him. Additionally, all her peers and colleagues look down upon their relationship and talk all sorts of things about them behind their backs.

So what will Ji-Yoon do now? How will she keep her department going? Will her relationship with her work friends get better with time? And what about her affair with Professor Dobson? Will she dump him because of everybody’s judging stares?

The cast of The Chair Season 1 includes:

Sandra Oh– Dr. Ji-Yoon Kim- The new chair of Pembroke University’s English department must save it from falling.

Jay Duplass– Professor Dobson- Ji Yoon’s love interest is also a part of her department. He is quite a controversial character, and several students protest against him.

Nana Mensah- Yaz McKay- Another English Professor in Ji Yoon’s department. She is progressive in her ways of teaching and liked by all her students and peers.

Bob Balaban– Professor Elliot Rentz- An English professor who is too comfortable with his ways of teaching and doesn’t want to make his teaching skills better.

Ron Crawford– Professor John McHale- One of the oldest members of the English Department who has almost reached his retirement age.

Netflix has released an official trailer along with a small teaser to give viewers a sneak peek of what’s coming their way in August. As students play pranks on her and colleagues badmouth her behind her back. We see Ji-Yoon trying to find a way to stabilize her miserably failing department while also trying not to lose her sanity. The trailer also gives us a small glimpse of Ji Yoon’s confusing relationship with Professor Dobson. Who works under her now that she is chair.

Season 1 may get another trailer or teaser as the release date is just a few weeks away. We will update you guys as soon as we get more information about the Chair Season 1.