After the show became available on Netflix, there has been a huge boost in viewership numbers. Consequently, fans are very eager to find out whether there will be the 4th installment of the show or not. And to solve your queries, we are back with another article which contains all details about Manifest Season 4.

Gear up because this is going to be a wild ride of emotions.

Will there be a Manifest Season 4?

The show, which recently completed its third run on NBC, has been canceled, meaning that there won’t be any 4th season.

This news came as a shock to fans because season 3 of Manifest ended on a cliffhanger, so canceling the show is an unusual thing to do. Streaming services backed up their statements by saying that the show was not getting enough viewership needed to continue with its production; hence they had to take such a grave step.

But no one was more shocked than the series creator, Jeff Rake, as he had promised fans before that the supernatural series will have a total of 6 running seasons.

Jeff took it to Twitter to announce how grieved he was over the cancelation news. He urged fans to save the show by making the hashtag #savemanifest go viral. Many fans came to the rescue, and now we are hopeful that NBC will rethink the cancelation.

He has no intention of canceling the show. Instead, he wants to continue with the story to give fans the ending they deserve. But it seems like he does not have enough power to reverse the decision. 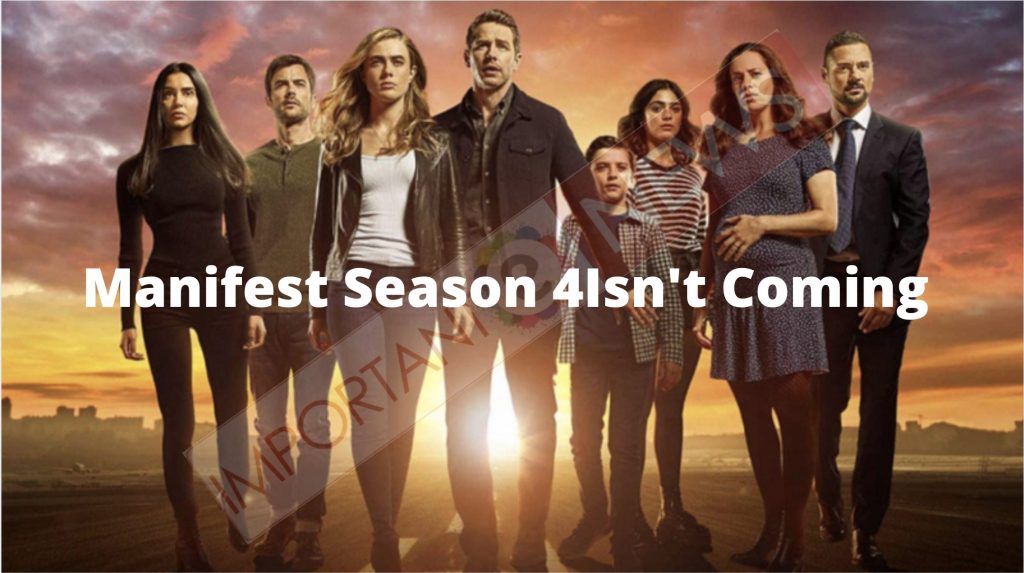 When is the Manifest Season 4 coming out?

After the third season of Manifest aired, NBC announced that the show would not be renewed for any more seasons in June. In other words, the show was canceled. Consequently, there is no release date for season 4 either.

But as the series creator Rake is adamant about saving the show from being dumped, we have some positive thoughts. If the hashtag gains enough attention, the streaming services might renew the season. The other factor that matters is the rating on its third season.

As we all know, shows that do not do well in terms of rating are usually discontinued, so if the third season starts getting enough clout, we can expect the 4th season.

All things aside, if NBC decides to renew the show. Then, we will most likely get to see the new season in late 2022 or early 2023. But up to this date, we don’t have any renewal news yet.

Will the Same Cast Return?

The show’s season 3 ended on a cliffhanger, so the rating will go down more if the cast changes completely. And the creators do not want that; hence, we can conclude that the cast will remain the same.

Depending on the story development, we might get to see some new faces, too, so that is a plus point.

If everything goes as per our assumptions, then get ready to see Melissa Roxburgh as Michaela Stone, Josh Dallas as Ben Stone, Athena Karkanis as Grace Stone, J. R. Ramirez as Jared Vasquez, Luna Blaise as Olive Stone, Jack Messina as Cal Stone, and if there are any other additions then we will only get to know about it when the 4th season goes on air.

Recap of Manifest up till season 3.

Here is a short recap for you on the story of Manifest. However, if you have not watched the series yet, we will strongly advise you to skip this paragraph to contain major spoilers.

The story’s main plot revolves around a group of passengers who mysteriously disappeared in the air, but after 5 years, they reappear, but now everyone thinks that they are dead.

The story develops in the upcoming seasons.

What will the plot of season 4 revolve around?

Season 4 will most likely pick up from where the show ended in season 3. Things did not end well in the finale, so season 4 will revolve around that plot twist.

But as Angelina stabbed grace, we won’t be seeing Grace in season 4. She might return in some flashback scenes. So the story will tell us what led to Angelina killing Grace and kidnapping her baby. The story will also explore Ben’s character and how he will cope with the terrible loss of his wife.

The plot of season 4 will be quite interesting, but only if NBC renews it.

Is there any official trailer?

No, up till now, there are no official trailers for the 4th season as NBC canceled it.

However, if we get any updates about the new season’s trailer, we will let you know.

So that was a wrap on all the updates of the Manifest’s new season. Got more questions? Ask us in the comments down below.