Fans have been asking for Re: Zero, Overlord, Konosuba, and Tanya the Evil crossover, and now, after years of wait, they are finally getting one! The anime movie is going to release in 2022. All of these aforementioned anime was published by Kadokawa Corporation. As Isekai has proved to be very successful for the firm, they are now adamant about expanding the universe and generating as much content as possible! Which brings us to our next question: Will there be a sequel to the upcoming Isekai Quartet: Another World movie?

Created by Minoru Ashina and animated by Studio Puyukai, the upcoming anime film will serve as a chibi-style crossover. The individual anime has a very serious storyline, but this crossover will present a slightly less serious plot. This means we’ll finally get to see the fun side of our favorite characters!

Recently the official website of Isekai Quartet: Another World gave us a short teaser and basic information about the cast and crew. However, there were some hidden hints too! And some keen-eyed fans were able to spot it. Below you’ll read all about it. So, let’s get the ball rolling!

Even though we have a release date for Isekai Quartet: Another World, it’s still not great news. Because international fans are still unaware of the premiere date of the upcoming anime film, however, it will come out in 2022. No specific date has been available so far.

Moreover, we can’t pinpoint when the anime release in 2022 because Kadokawa has many projects planned for 2022. But we know that this wait will be worth it because Minoru Ashina is working both as the director and the writer. 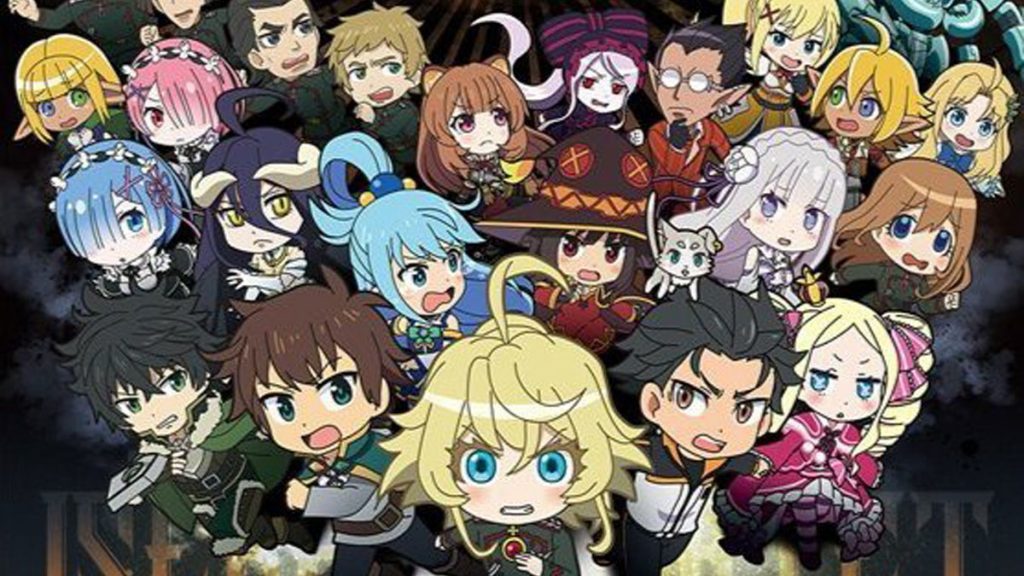 A variety of characters were revealed in the brief promotional teaser. Obviously, the main characters of “Re: Zero Starting Life in Another World,” “KonoSuba, Saga of Tanya The Evil,” “The Rising of the Shield Hero,” “Overlord,” and “Cautious Hero: The Hero is Overpowered but Overly Cautious” will be there in the upcoming anime.

And obviously, there will be other heroes too! You’ll also get to see characters from several other Kadokawa projects.

The list of confirmed characters that will feature in Isekai Quartet: Another World is pretty long. Hence we have divided them based on their origin animes!

The Rising of the Shield Hero: Naofumi Iwatani, Raphtalia, and Filo.

The Cautious Hero: The Hero Is Overpowered but Overly Cautious: Seiya Ryuguin and Ristarte.

We don’t have an official plot synopsis for Isekai Quartet: Another World, but as the name suggests, most likely, the characters will get a new universe. They’ll all be high school kids who later grow up into university students in this new world. But this is just one out of the many possibilities that the plot can be based on.

Maybe the characters of different anime will get to explore each other’s universe. However, one thing is for certain that Isekai Quartet: Another World will surely make you laugh a lot! As the movie will release in 2022, we won’t be getting major plot details any time soon.

There is no full-fledged trailer of Isekai Quartet: Another World, but we have a short promotional teaser that will give you an overview of the new parallel world that the anime will be set in. Don’t. Forget to watch it on the official site!

Unfortunately, there is very little that we know about the upcoming movie. But hopefully, we’ll get to know more once the release date of Isekai Quartet: Another World surfaces online. So, stay tuned!