The pandemic has caused problems for almost every industry, especially the game industry, where the work can only be done in studios. One such victim of the virus was Guerilla Games, the developer of Horizon Forbidden West. However, it was recently announced that the video game which was supposed to release this summer had been rescheduled. But now the question arises when Horizon Forbidden West launch will?

Horizon Forbidden West is a sequel to the 2017 PlayStation 4’s exclusive game “Horizon Zero Dawn,” which sold more than 10 million copies after its debut! This also explains the upcoming game’s hype. As the game will launch on PlayStation 5, the gamers have very high expectations from it. And it is reported that Guerilla Studios will continue with Aloy being the main character. But will the game follow the same storyline? Let’s find out!

Horizon Forbidden West is an action role-playing game that revolves around a young huntress, Aloy, who belongs to the Nora tribe. She decides to go on a quest to explore an arcane frontier, “Forbidden West,” where a rare virus kills everyone it hosts on! But to reach this place, Aloy has to go through certain challenges. Amidst this journey, she will come across ravaged lands, dangerous enemies, and extreme natural disasters. This harsh road will also show her some of the most beautiful scenery. And be prepared to see the world both below and above the sea! Considering that the game will be released on PS5, the graphics are going to be exceptional.

But other than these general hardships, what else will Aloy face? And most importantly, is the gameplay worth the money? For all such queries, continue reading the article because we have covered everything about the upcoming game!

As mentioned earlier, the game’s release date had to be delayed because of some complications caused by the pandemic. However, nothing to fret about because the game is not canceled. It has just been rescheduled for a 2022 launch!

Sony Corp. has not announced the specific release date for Horizon Forbidden West yet, but the game will come out in the first quarter of 2021, only if the team reaches their target. And if everything goes as per plan, then expect the game’s official release date to come out by the end of 2021! 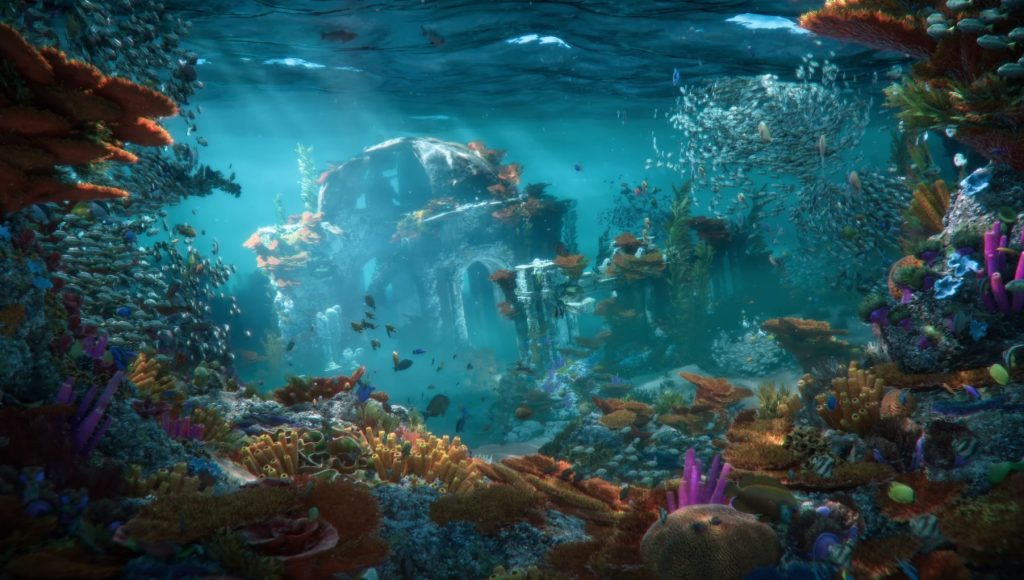 The game’s specialty is that it is played from a third-person’s perspective. Horizon Forbidden West is set in post-apocalyptic California, Utah, and Nevada. The players will especially have to explore the ravaged land of “Forbidden West. Similar to the previous installment, this time too, the user will control the character of Aloy. And the most exciting update is the highly enhanced maps!

The upcoming installment will have some original places from Horizon Zero Dawn (2017), like San Francisco and the Yosemite Valley. Another exciting update is the underwater world! This time the player will not just explore the ruins of the world on land, but they will also experience the one under the water! So, that is pretty cool.

Climbing mountains in the upcoming installment will be even more fun because of new features like; Pull Caster, Shieldwing, and others! There is a whole new variation of machines in Horizon Forbidden West. All of them are not known yet, but some of them include; Snapmaws, Shellsnappers, Clawstriders, and many more.

The game will only be released on two platforms; PS4 and PS5! So does that mean that Horizon Forbidden West will never come to PC? Not really because its preceding installment did release on PC, but it took some time. So, if the developers will follow the same pattern, then yes, you can expect the game to come to PC too. But these are our assumptions, so it is better not to keep any expectations for now.

As the game’s release date is still uncertain, not many retailers are selling it. But there are a few sites from which you can pre-order Horizon Forbidden West. But they are costly, and the estimated cost is around £69.85. So, it is better to let the developers announce the price for the game themselves!

However, if you still haven’t played Horizon Zero Dawn (2017), this is the golden time to play it! You can purchase this game for a meager price. So, avail of the offer before the retailers increase the price.

There is no official trailer for Horizon Forbidden West, but you can watch the 14 minutes long video in which the gameplay of the upcoming game was streamed. It will give you an idea of the new features, so watch it now.

As soon as Sony Corp. discloses the release date of Horizon Forbidden West, we will update this site. Bookmark the page for the latest news!