We all know Kevin Hart as one of the comedians who always gives his audience a reason to laugh. But Fatherhood is one of those movies where Hart is going to play a serious role.

Fatherhood is not the first movie where Hart will be playing a sincere section. You must be aware of “The Upside!” where he played the role of a prisoner. This film proved that Hart is capable of playing heavier roles that are different from his stream. The movie gained a profit of $125 million on the box office.

Fatherhood is an upcoming comedy-drama film that originated in the United States.

Paul Weitz is the director, and Dana Stevens is the storyteller of the film.

Marty Bowen, Kevin Hart, David Beaubaire, and Peter Kiernan are the producers of the movie Fatherhood.

The film has gained much popularity before its release, based on Two Kisses for Maddy: A Memoir of Loss and Love by Matthew Logelin.

To know more about the film, let us discuss its plot.

Release Date Of The Movie Fatherhood: 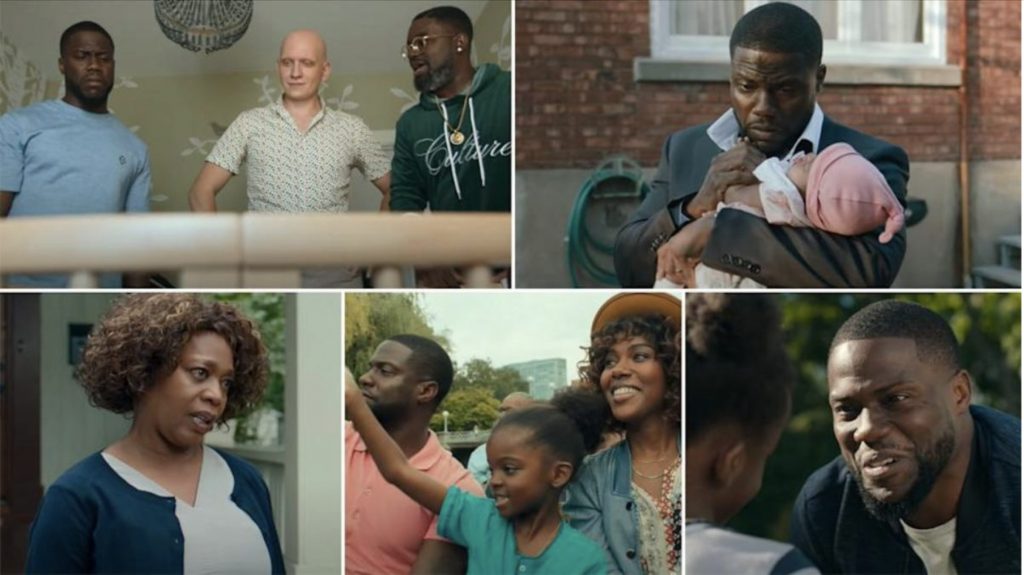 Fatherhood is going to release on 18th June 2021. It will get aired online. The official declaration of the release date of Fatherhood is a hot topic now. Everyone is very excited to watch the movie.

The movie had its release date on April 2020 initially but got postponed to January 2021. Then, it was about to be brought forward in January but got delayed again. Soon, Netflix licensed the movie from Sony Pictures Releasing, and now it will appear on Netflix.

It is releasing just in time for father’s day weekend, so grab your popcorns, save your data, and get ready to stream Fatherhood.

What Do We Know About The Plot Of The Film Fatherhood?

The story is all about Matthew, who struggles in his life to raise a child without his wife. Kevin Hart is one of the most bankable stars of Hollywood and is a great comedian. In this movie, he will give his fans a new experience, which will differ from usual. The film will have comedy moments too. He faces the unexpected death of his wife named Liz.

The story demonstrates the first year of the child’s development without his mother and the experience of a single father raising him. Liz died when her daughter was a newborn.

Matthew loses his wife, Liz, during the birth of her daughter, whom they named Maddy. This forces Matthew to learn the skills of raising a daughter as a single parent. On the other hand, he also suffers a lot after losing the love of his life.

According to the trailer, Matthew seeks help from his friends, Oscar and Jordan, but still faces various difficulties. He usually ends up finding himself in trouble. Soon he finds a solution to this situation and shifts his home to Minnesota, where he lives with his parents. They help him to get out of the trauma of losing his wife. They can manage the needs of the daughter together.

As the story progresses, Matthew tries to move on and finds a suitable partner for himself soon.

As the movie experiences the existence of Kevin Hart, there will be too many moments of laughter.

Have You Watched The Trailer Yet?

You will get to know about the overview of the movie after watching the trailer. The trailer crossed the internet by the crew and has blasted the records with its views. Since 2020, fans are eagerly waiting for the release of the film.

After having an eye on the trailer, you will get aware of the action sequences that exist in the film. Further discussion related to the movie is mentioned below.

Who Is The Part Of The Movie Fatherhood?

The following actors and actresses are the part of the movie:

Raising a child/infant is a difficult task. It becomes more complicated when the parent is single. Fatherhood shows the audience the conditions in which a single parent takes care of his/her child.

Despite being a serious movie, there are plenty of moments where the characters will make you laugh. But, of course, the existence of Kevin Hart itself proves that the film will have lots of laughter in it. This type of story will surely put a smile on your face.

It is the perfect piece to be released at the time of Father’s Day.