Well, we have got some amazing news for all the soap opera fans out there! Avert your eyes, please, because we have brought you the Days of Our Lives Spoiler for two weeks in advance!

The world-famous show is back! Days of Our Lives is one of the longest-running scripted TV programs in the world. Ever since its airing in 1965, it has aired nearly every weekday.

The series takes place in Illinois, set in a fictional city called Salem. The main focus is on two families, the Horton and the Brady families. So, without wasting any time, shall we move on to the spoilers now.

Days of Our Lives Spoiler

Paulina offers her daughter, Chanel, advice regarding matters of her personal life. But will Chanel heed her mother’s words? Nicole believes she knows everything about the situation surrounding Allie. Henry’s mom has struggled with her jealousy, but is she ready to acknowledge it?

Things are going pretty downhill for dear old Philip, but they certainly bring a new meaning to the word disaster when he walks in on a worst-case scenario, Chloe and Brady sleeping together! And if this isn’t enough, wait till Ava makes a special announcement that’s going to sweep Rafe off his feet!

A top-secret mission is about to happen, and John is the man for the job (probably because we all know that he can keep a secret). But we’re still wondering if it will involve the stolen jewels? They’re going to play a big part in the Days of Our Lives spinoff, Beyond Salem. Haven’t you heard about it? So, ensure to check it out, as it launches on 6th September!

Even the simplest task can stir up the most trouble. Don’t you believe us? Tune in on Thursday to see Paulina, Eli, Abe and Lani have breakfast and whatnot!

Roman and Anna are in a rough spot considering the marriage of their daughter, Carrie, isn’t going well. Meanwhile, Chad runs into Gabi and Jake (well, this is definitely taking the tension off the charts!) 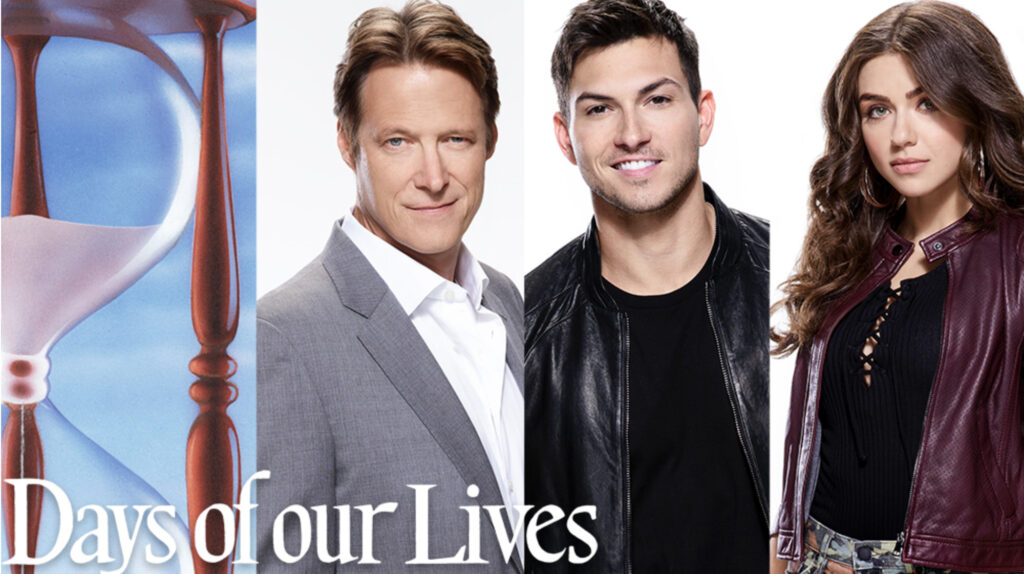 Married once again, they are naturally planning what comes next. A honeymoon! And perhaps something more? Join them and find out!

Calista agrees to keep Bonnie’s secret, but there’s a catch. So, is Bonnie willing to go as far as breaking the law to bury her past?

Gwen lands herself in another fine mess, of which her father, Jack is fully aware. But what’s going to happen when she finally reveals her true self to him? Watch the 3rd September episode to find out more about it.

Married and living together happily, Ciara now wants to have a baby (this particular couple should have tied the knot ages ago). Ben, however, is still hesitant. This leaves us wondering, why is that?

Doug seems to be having issues. In the meantime, Roman is worried about his mental state. Will he confront him about it?

Justin is about to make a discovery that will stun him out of his wits. Is Bonnie’s secret finally coming out into the open?

Trouble seems to find Paulina ever since she’s moved to Salem. So far, she has escaped the consequences, but will she be just as lucky now when she finds herself in hot water again?

Jack knows how much of a troublemaker his daughter is. But when Gwen finally confesses her dark deeds, what will he do?

Well, you have got your most awaited sneak peek now so, sit back, folks and watch how the drama unfolds!

For more information and weekly updates, keep on following our blog!